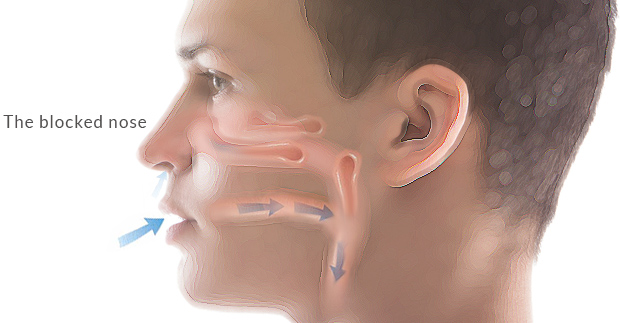 Many people spend their entire life without appreciating that they suffer from nasal obstruction. Many will recognize this symptom when they develop a blocked nose during a “cold” which can lead to disturbed sleep, snoring and awakening with a dry mouth.

Mouth breathing at rest is not a normal condition. The nose is designed to humidify the air that is breathed into the lungs and this humidification function is lost when mouth breathing.

There is a significant difference between adults and children in respect of a blocked nose. Mouth breathing in children in many instances is cured by an adenotonsillectomy. Much less frequently, conditions of the nose need to be treated so that children can resume nasal (normal) breathing.

In adults, two of the commonest causes of nasal obstruction leading to mouth breathing include chronic rhinosinusitis which is inflammation of the lining of the nose and secondly, restriction of airflow because of the shape of the nose.

Chronic rhinosinusitis is a long-standing inflammation of the nasal airway and hayfever is one of the examples of this condition. It is probably only a minority of people with hayfever that suffer from significant nasal obstruction as it is most commonly the other symptoms of hayfever such as itchy eyes and nose, sneezing and a runny nose that predominates. Hayfever is normally treated very well with nasal steroid sprays and/or oral antihistamines. If medical treatment fails, hayfever responds extremely well to surgery.

Endoscopic sinus surgery is the surgical method of addressing this problem and in simple terms, this aims at reducing the amount of tissue within the nasal cavity and this in turn leads to better ventilation of the remaining nasal lining which in turn is better behaved and can be more readily treated with nasal steroids. The vast majority of people describe endoscopic sinus surgery as a reasonably comfortable procedure.

Nasal obstruction secondary to the shape of the nose most commonly occurs in people who have broken their noses previously and restoring the shape of the cartilage and bone mostly returns the airway to normal.

The shape of the Caucasian nose also lends itself to nasal obstruction secondary to narrowness of an area called the internal nasal valve. This area is up to 1 cm behind the actual opening of the nostril. This angle can be narrowed particularly in people with tall noses and attempts at widening this angle can be undertaken by utilising tapes across the top of their nose to improve airflow. This angle can also be supported from the inside by using specially shaped supports within the nostril. Surgical correction of the shape of the nose can also be used to confer a permanent benefit to the nose to facilitate nose breathing. Interestingly, the goals in undertaking this surgery called a functional septorhinoplasty are extremely similar to a cosmetic septorhinoplasty and mostly, a functional septorhinoplasty results in a better looking nose.

In my experience, some of my most gratified patients are those in whom nasal function has been restored, particularly in those who have required both endoscopic sinus surgery and a functional septorhinoplasty surgery.

If you have any questions about nasal surgery please contact us.