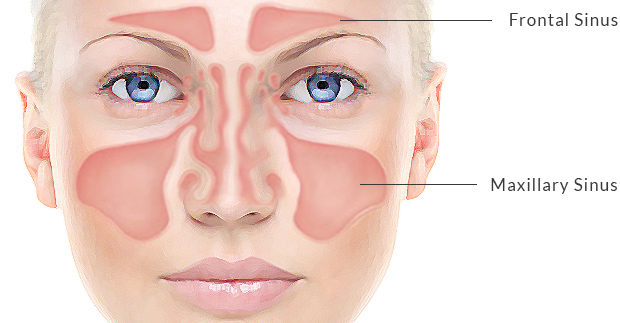 Chronic / recurrent sinusitis is influenced by several factors including infection, structural abnormalities, disease of the mucosal lining (allergies), the quality of mucus (dairy product intolerance) and the function of tiny cilia important for mucus transport.

All of the functions of the sinuses and nasal cavity are not clearly understood but certainly humidification of the air that is breathed into the lungs is a very important function. The sinuses ventilate (breathe) through very small orifices relative to their size and analogous to a balloon. With any inflammation of the lining of the nose the "neck of the balloon" closes reducing ventilation. This can result in infection, facial pain, a blocked nose and a postnasal drip. Measures to control these symptoms include saline nasal douching, steroid nasal sprays, intermittent use of decongestants such as Otrivin, antibiotics and oral steroids. All these methods aim to open the "neck of the balloon".

If these methods failed to control symptoms, surgery is indicated. Once again, the aim of surgery is to permanently open the sinuses. A further analogy of the concept of endoscopic sinus surgery is knocking down all the internal walls of the building to leave a single space which is well ventilated.

Endoscopic sinus surgery takes place under general anaesthetic and the extent of surgery is determined by symptoms and to a lesser degree by the appearance of the CT scan.

The aim of surgery is to diminish the amount of inflamed nasal mucosa and secondly, to open the sinuses to allow them to ventilate to improve the inflammation. If this does not improve the inflammation itself, nasal steroids are much more easily introduced into the wide open cavity. In addition to opening the sinuses, the inferior turbinates can be reduced as described below.

Most candidates are surprised at how comfortable the endoscopic sinus operation is. The response to surgery is variable but many are aware of an immediate improvement. Mostly, healing is completed by 6 weeks. Crusts of dried blood and mucus can collect in the airway causing discomfort and these need to be irrigated away with saline rinsing using a Sinus Rinse bottle. Inflammation around these crusts can cause discomfort in the middle of the face and around the eyes and this indicates that the Sinus Rinse is not being used vigourously or frequently enough.

reduction of the inferior turbinates

The inferior turbinates are the lowest of 3 turbinates in the nasal cavity and large vascular projections along the sidewall of the nose and can play a significant part in blocking the nasal airway especially if chronic rhinosinusitis (inflammation of the lining of the nose) is present.

Mostly, I undertake reduction of inferior turbinates in conjunction with endoscopic sinus surgery.

Those who have nasal obstruction as part of their hayfever symptoms can do extremely well with reduction of the inferior turbinates.

These forms of surgery are not permanent but may give relief from symptoms for 1-2 years. Cautery is especially useful in children to provide the relief and to judge the effect of this minimally invasive surgery. Should cautery be successful, it can be repeated or the permanent endoscopic reduction of the inferior turbinates can then be considered if symptoms return.

Endoscopic reduction of the inferior turbinates is undertaken under general anaesthetic using operating telescopes. Some of the lining of the turbinate is removed along with the bony skeleton.

As the inferior turbinates are a vascular organ, there is a significant risk of post-operative bleeding if individuals engage in exercise or vigorous activity in the 2 weeks following surgery.

Mostly, there is an immediate appreciation of an improvement in the nasal airway. Soon after surgery, clots and crusts can collect in the nose causing further nasal obstruction which ultimately resolves.

Once again, it is not painful surgery but the nose may become obstructed by crusts and mucous which need to be irrigated away with saline rinsing in a Sinus Rinse bottle.

If you have any questions about sinus surgery procedures please contact us.