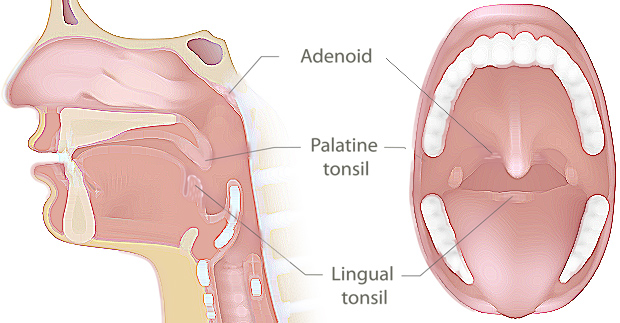 Adenoids and tonsils are composed of lymphatic tissue and are part of the immune system and designed to help with immune reactions particularly against bacterial and viruses through a number of means. They encircle the top of the breathing and digestive tract.

The tonsils are visible on either side of the back of the throat but the adenoids are invisible and behind the soft palate.

They do not form a very important part of the immune system and these organs have been removed for many decades with no harm noted to the system. The body has other and more important methods of preventing infection or fighting off bacteria and viruses.

The adenoids and tonsils are different sizes in people. The adenoids tend to shrink in size after early childhood but the occasional young adult may have adenoid tissue present. Similarly, the tonsils usually also shrink in size but tend not to disappear.

PROBLEMS ASSOCIATED WITH TONSILS AND ADENOIDS

This is an increasingly recognised problem for children and is becoming the most common reason for removing tonsils and adenoids surgically. Rarely, the same condition can affect adults. The hallmarks of sleep disordered breathing include snoring, obstructed breathing, restless sleeping with self awakening at night. These children are difficult to awaken in the mornings, are grumpy, fall asleep readily during the day and may have a poor concentration span.

The most common form of infection is recurrent acute tonsillitis which are episodes of tonsil infection which leave (mostly children) ill for a week at a time. This can be a very painful disease associated with high fevers and general unwellness. Frequently there is a family history of the condition. A rough guideline for those who are likely to benefit from surgery includes:

This is a chronic and constant, low-grade infection of the tonsils. The lymph nodes on the side of the neck may be tender and frequently those with this condition produce small, cheesy and very smelly balls from their tonsils called tonsilloliths. This is also frequently associated with a smelly breath (halitosis).

This begins as an infection of the tonsil itself and then spreads beyond the tonsil to form an abscess between the tonsil and the underlying muscle. A quinsy is an extremely painful condition which, in the vast majority of instances, affects only one side. The initial treatment of this condition is drainage of the pus with rapid resolution of symptoms. If a second quinsy occurs or if recurrent tonsillar problems become evident, a tonsillectomy is indicated.

Chronic, low-grade infections in the adenoids with bacteria protected from the immune system and antibiotics by a structure called a biofilm frequently found in children who have a "snotty" nose or middle ear infections. The most common indication for removal of adenoids in this scenario is otitis media with effusion (glue ear) or recurrent acute otitis media. Removal of the adenoids can result in an immediate resolution of the "snotty" nose.

An (adeno-) tonsillectomy is undertaken under general anaesthetic. The tonsils are generally removed by disssection and the adenoids by curetting (scraping) or by cautery.

Pain varies significantly between people. It is most important to ensure that there is adequate fluid intake and that painrelief is administered regularly. A small percentage of people (1-3%) experience a post-operative bleed most of which do not require further treatment. Many children are better within one week but an adult will certainly take longer to recover from this surgery.

If you have any questions about this procedure please contact us.