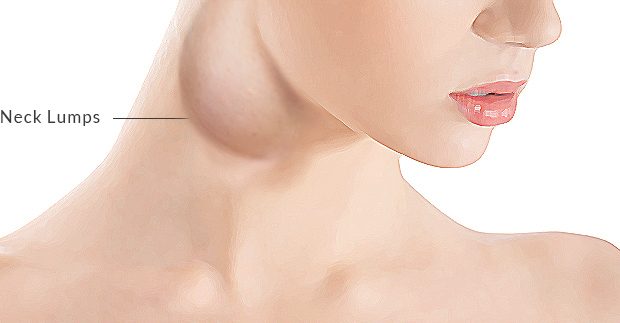 This is an extremely broad topic where I describe some of the possible neck masses but this is an exhaustive topic. Rather, I will describe a brief outline of the various categories of neck masses and the investigation that is required to investigate the masses.

The categories of neck masses

Broadly speaking, there are 3 groups into which neck masses can be classified. These are congenital, inflammatory and neoplastic neck masses.

Congenital neck masses are masses which we are born with, but may not manifest until later in life. Generally, these present in children and younger people. Examples of this can be a branchial cyst, a thyroglossal cyst or vascular abnormalities.

A neoplastic neck mass is the result of abnormal cell growth and can also be called a tumour. The growth of these cells is not coordinated with a normal tissue surrounding the mass. Broadly speaking, tumours can be benign or malignant in which case they are called a cancer. Neoplastic neck masses occur usually in older adults and the risk of the mass being malignant increases with age.

These neck masses can arise from the salivary glands, the thyroid and various structures within the neck.

The most common form of cancer in the neck in New Zealand and Australia is spread to the lymph nodes from a skin cancer.

Firstly, a careful history is taken and this frequently can give an idea as to what a neck mass may be. This is followed by an examination that again can refine a clinical diagnosis as to what the mass may be.

Special investigations can include radiology and for neck masses this most commonly means the use of an ultrasound or CT scan. Only occasionally an MRI scan is requested.

Prior to any surgery, it is very important to have a tissue sampling of the mass which most importantly describes whether a mass is benign or malignant (a cancer). It is most important not to spread any of the cells from within the neck mass as there is always a possibility that the mass is malignant.

Tissue sampling can be undertaken by using an ultrasound-guided core biopsy which gives the most accurate tissue sampling without spreading cells of the neck mass. A fine needle aspiration is even less invasive but is not as accurate. A fine needle aspiration can normally give an accurate idea as to whether a mass is benign or malignant (a cancer).

The management of neck masses depends on the results of the above mentioned investigations.

If you have any questions about neck lumps please contact us.